Instead, early that Saturday morning, they came in with a security card and a wheelchair for me to go back and fourth to the fifth floor NICU. I wasn’t trying be a badass, but I didn’t need the wheelchair. That whole “mom lifting the car off her baby” super strength adrenaline kicked in. I could jog up the stairs if it meant I got to be with my baby.

Chris had been up there already. He warned me as the elevator doors closed that it was one of the worst places he had ever been: nothing but sad, sobbing parents sitting beside sick little babies inside mid-evil looking apparatuses. “Mandy, ” he said, “he doesn’t look good.” He grabbed my hand as the elevator doors opened. 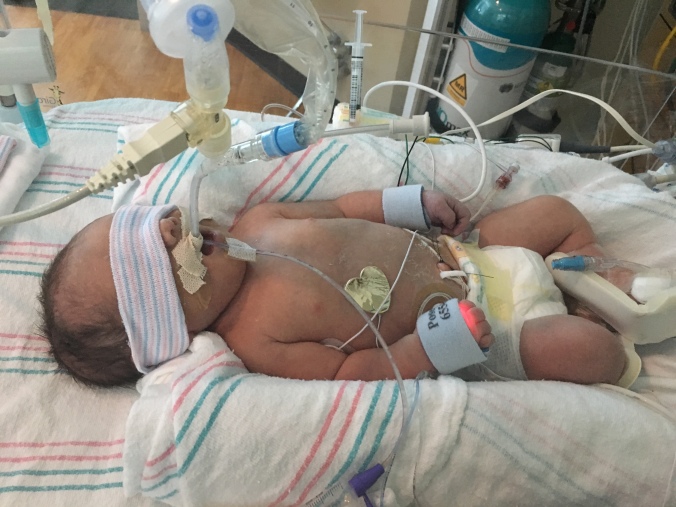 “Why does he look blue?” I asked as we stood around him. He was all alone in a large room, swarms of doctors and nurses around him, tending to beeps, alerts, alarms, cords, and needles attached to my tiny guy. “It’s some oxygen issues and it’s some mottling.” A older Nurse said breathlessly as she tended to a difficult cord. “Is that bad? “I asked. We tend to always look for someone to reassure us in these situations. I learned very quickly that doesn’t happen too often in the NICU.

“It’s not good, hun.” She said, avoiding eye contact with my weepy eyes.

By the time my mom came in, I had begun to have an out of body experience and truly, it’s exactly the way it has always been described on tv and in books. I didn’t float up to the ceiling, but rather, I floated outside the room to the little nurses nook right outside of the door and saw the chaotic scene unfold . I saw myself in my cute grey robe I had gotten as a shower gift, hysterically screaming to my mother “He is fucking dying, mom!” Her arms were wrapped around me, holding me up on my weak knees. I saw Chris, stoic, standing against the back of the room, trying not be in the way, trying to stay calm and be strong. It was brief, but it still plays like a bad movie in my head even as I write this. I’ve never felt so helpless in all my life.

I came back to my body, hearing some reassurances from the staff but they sounded a million miles away.

Where gonna try not to let that happen.

He’s a fighter. He’s trying to beat this.

I remember looking at my mother, begging her to fix this, the super hero that she is. Like a scared little child, I wanted her to make it all better. Make him better. Please don’t let this happen, mom. But as grown ups we learn that our parents aren’t super heroes and she was just as helpless and shattered as I was.

No one was fixing him. My heart was breaking. I was preparing myself to lose him.

“It’s bacterial, we know that now. We could start him on antibiotics but at this point his vitals are just too bad and he is septic. That means this bacteria is poisoning his blood and shutting down his organs.” Dr. P said, carefully studying the monitors that continued to go off. They would just have to wait and see.

Get some rest, everybody said as I sat in a chair at the back of his room. That wasn’t going to happen, people.

I half heartedly greeted family members and close friends that visited throughout the day. My voice trembled involuntarily as I tried to explain what was going on the best that I could. Everyone tried to comfort us with stories of someone’s cousin or coworker’s child being in the NICU and leaving perfectly fine but, honestly, their voices faded into a fog. I spent the day stroking Miles’ tiny hand at every opportunity I could. I would also study Dr. P’s face. He would take off his glasses looking at reports and rub his eyes, he would rub his temples looking at the monitors. He made phone calls with Miles’s chart in front of him. He look defeated and at 10:30 PM, he was.

“We are going to lose him if we don’t get him out of here and downtown fast. He is getting worse. They are a level 4 NICU and have a machine that may help him there. We are calling for a life flight now. I’m sorry I could not do more.” I had a strange feeling that his shift probably ended hours ago. He looked sad and tired. He was the first of many good doctors we encountered on this journey.

The life flight team arrived at midnight. I rocked back forth like one of those elephants in distress on the Discovery Channel as they moved our sweet baby into a tube like machine and prepared to fly him across the Houston sky.

My tired, heartbroken family and I zipped along an empty I-10 freeway toward the children’s hospital, guided by the red lights of the helicopter carrying our most precious cargo, blinking through the stars.

Follow Me & You in a Blue Canoe on WordPress.com

There was an error retrieving images from Instagram. An attempt will be remade in a few minutes.

Me & You in a Blue Canoe

Me & You in a Blue Canoe